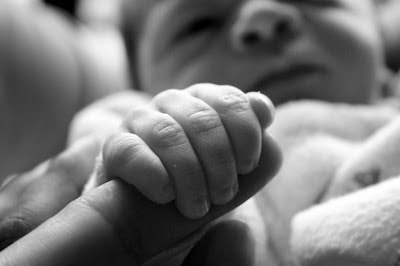 Adoption has really been tugging at my heart strings for the past year or so. John Paul and I are in no place to adopt right now (they actually wouldn't let us) and have a home grown addition to our family coming very very soon. But until recently, adoption was just an abstract concept to me. I had a few friends who were adopted. I felt that I would be open to adopting if God asked me to. Yet now, for the first time in my life, I have been following the adoption journeys of people that I actually know. I've been exposed to the realities of adoption: the pain, the joy, the struggle, the expense, the leap of faith...I've been witnessing these things first hand. It's given me renewed perspective on adoption.

Adoption is not easy. It's expensive. It's emotional. It's challenging. It's also something we're called to do. The Bible carries a consistent call to care for widows and orphans.


"Pure and genuine religion in the sight of God the Father means caring for orphans and widows in their distress and refusing to let the world corrupt you."
- James 1:27 -

"Father to the fatherless, defender of widows --- this is God, whose dwelling is holy. God places the lonely in families."
- Psalm 68-:5-6 -

"And anyone who welcomes a little child like this on my behalf is welcoming me."
- Matthew 18:5 -

Of course taking care of orphans can take many forms: orphanages, foster care, adoption, etc. There is an initiative taking place among Western New York churches right now to empty the foster care system that I think is an incredible undertaking.

I guess what has most surprised me about adoption is the level of criticism/judgement adoptive parents can get from other people. For instance, whether you adopt domestically or internationally. People have strong opinions about this. I've heard some people say to the overseas adopter "why not adopt kids right here at home? there are orphans here too you know." These sorts of criticisms are baffling to me. Whether it's a little girl from China, a little boy from Romania, or someone from down the street---all of these children are orphans. They're abandoned and each and every one of them deserve to be rescued and wanted.

As one of my favorite adoption bloggers wrote recently, it's about what God is leading you to do. And no matter where you choose to adopt...it will be a challenge. Don't let all your reason and excuses keep you from rescuing the helpless.


"Speak up for those who cannot speak for themselves; ensure justice for those being crushed. Yes, speak up for the poor and helpless, and see that they get justice."
- Proverbs 31:8-9 -

Little girls in China are basically discarded. So many that realistically they won't all find homes despite the fact that China has the highest adoption rate in the world. This is a double edged sword in a lot of ways. The high rate of adoption (which is expensive) has led to an increase in human trafficking in China. People are selling children to orphanages to turn a profit.

Other countries, war-torn, poverty stricken and desease ridden countries, have difficult blocks towards outside adoption. Children are forced into child slave labor, prostitution, are affected by AIDS and poverty.

In Eastern Europe and Russia, special needs children are placed in disgusting conditions in mental asylums where a 14 year old girl can resemble a malnourished 4 year old because of how she is treated.

And yes, in America there are children who need parents as well. Children from situations that are bleak. Abusive situations, poverty, and special needs.

I wrote once about special needs adoption and how much that had broken my heart recently. There is something about special needs orphans that crushes me. They are truly unwanted. Their care is even more difficult and most people are not willing to take on the challenge. As disgusting as the conditions are in other countries, I've realized this is a very real issue in the U.S. as well. Friends of ours are in the process of adopting domestically and have to face hard decisions about potential special needs like knowing a mother has a history of mental illness, has been smoking, drinking or abusing drugs during her pregnancy. They are given the facts and asked if they are still willing to adopt. It's a difficult choice.

At the end of the day, adoption is never an easy path. It takes courage. To say we should focus on domestic adoption only when there are helpless children in disgusting situations all over the world, or to say that international adoption is somehow more noble than domestic when there are unwanted children right down the street from you...both are unfair and ridiculous. All children deserve love and rescue.

Posted by Noelle McLaughlin at 10:23 AM