Pregnancy Etiquette: Can I get an amen? 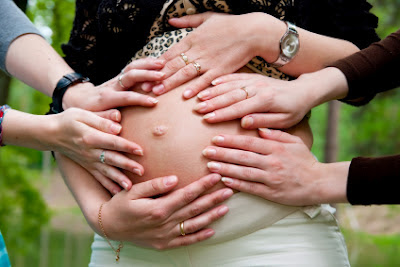 I know very few people want to read someone whine or be negative on their blog. But if you are currently pregnant or have been recently been...you know. People lose their filter and say the most outrageous things to you when you're pregnant. Not the majority of people, no, most people are perfectly fine, but enough people to cause you some regular annoyance or shock. When you're body is freaking out and you are distorting into some unfamiliar alien-like person you don't know, sometimes you just need to complain a tiny bit for your own sanity. Complaining for me isn't about getting sympathy. It's about how sometimes you just wanna look at another pregnant woman and say "Can I get an amen?"

There is of course the belly touching, the unsolicited child rearing advice, the weight jokes, the waddling comments, and so on. None of that really annoys me personally. What has come to annoy me more than anything else is the constant "one-up" comments that I get all too frequently. I don't even have to complain or say something negative to get them. Do you know what I mean by "one-up" comments?

It seems like anything I have to say about pregnancy (or life in general) gets some kind of " oh you don't know ____ until ____" comment from someone.  Examples...


"Man, I'm tired today."
"Oh you don't even know tired until you have to get up with a baby all night."

"We're taking a birthing class."
"Oh you won't learn anything from that. *smirk* Nothing but real life will teach ya how to parent."

"That was a good movie."
"Yeah enjoy that while you can, you're never going to the movies ever again. Muahaha."

"I like cheese."
"Oh you can't really appreciate cheese until you have a baby who is lactose intolerant and have to go without."

It's not even that there's not truth to these comments. They're probably well-intended or just meant to be funny. But apparently being pregnant gives people an opening to tell you how little you really know.

Occasionally these comments come from men, but more often they are uttered by older women whose last pregnancy was 25 years ago (and they've clearly forgotten everything about it). I get it. Having a baby is hard. Being a parent is hard. I don't remember ever proclaiming that it was going to be a breeze. I really don't need to be reminded about the plight of motherhood or "put in my place" about the stuff I'm currently dealing with during pregnancy. Just because I'm going to be really tired when "fill in the blank" happens doesn't mean that I'm not tired now or that I ought to be reminded that this is just the beginning. I'm pretty aware of these things. Even if I wasn't, who pokes a sleeping grizzly bear with a stick for fun anyway?

I've noticed that very few young parents (the ones actually in the midst of parenting infants and toddlers) make these comments to me. No, they just look at me with knowing in their eyes and offer a hug. And I love them for it.

So next time you see a pregnant lady...maybe say something positive to her and tell one of the things she has to look forward to about motherhood.

And whatever you do...don't poke her belly and make the Pilsbury Dough Boy noise. Just don't.

Posted by Noelle McLaughlin at 3:47 PM