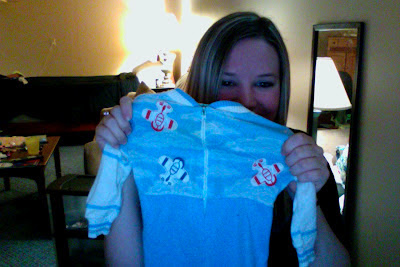 This was John Paul's when he was a baby. His mom gave it to me when she found out we were having a boy along with his baby blanket and his monogramed baby shoes. 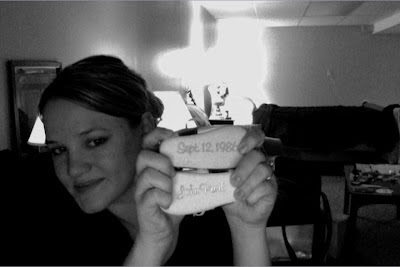 I'm 20 weeks! Ah! Can you believe it? I can't. Halfway there already! Time is flying by. I'm getting more excited and more nervous every day.

Things got VERY real for me this past Tuesday when we went in for our sonogram. Not only did we find out what we're having, but the whole experience was just so great. He's real. My little boy is in there doing somersaults. I saw him. He's healthy. Everything looked great. All my blood work was great which alleviated all the worries that maybe we'd get there and something would be terribly wrong. It feels so much more real knowing whose in there, that he's healthy, and seeing him move around. He was super active. I even felt him kick me during the sonogram! Such an amazing feeling.

We are so excited. To be honest, we both really wanted a boy. I was trying really hard not to have a preference, and I'd have been excited either way, but finding out it was a boy was sort of a fist pump moment for us, haha. My family is of course thrilled because my poor nephew Noah is drowning alone in a sea of estrogen over there. John Paul's family is also excited. I think they'd have preferred a girl (because they have the exact opposite problem) but also realize there are a lot more grandchildren to come on that side so there will inevitably be more girls coming on that side sooner or later.

I do want a little girl someday. But I'm excited that if we get a little girl she'll have a big brother just like I did. And now my fears of having only girls are alleviated.

I knew that this sonogram was going to be big for me and it certainly was. I just didn't feel pregnant before. Oh sure I had the symptoms, but mostly I just felt like someone with the flu and an expanding waste line. It's all so much more real to me now and it's going by so much more quickly.

We started texting and calling family members right away, but we also did a few fun "reveals" as well.

Rather than do a big "reveal" party, we decided it would be fun to do something fun for John Paul's niece and nephews. So we filled a balloon with confetti and handed out green boxes with candy inside. We told them the confetti and candy would be their clue. If it was blue it was a boy and if it was pink it was a girl. Here's a little video of that:


We later used Amos as a clue for John Pauls sisters when we facetimed showing them his very blue mouth (from the candy).

Probably the most fun gender reveal was today when my friend Meryl threw me a "virtual gender reveal party" on google+ with some of my closest friends that are scattered all over the country. I'll be posting more about that later.


So there you have it. The secrets out! We're having a boy! 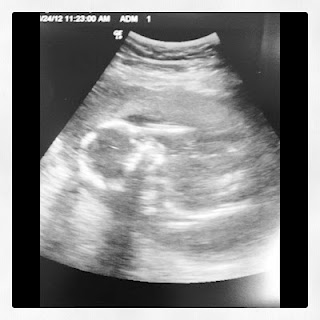 Posted by Noelle McLaughlin at 3:16 PM