The Ghost in the Electric Blue Suit 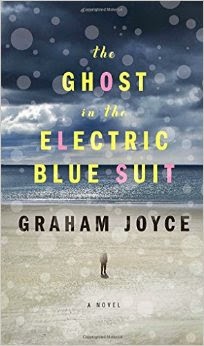 About a month ago, for reasons I cannot recall, I found myself browsing Buffalo "Meet Up" groups. The only one that I was drawn to was a book club for "eclectic readers." This basically means a book club for people who read widely across genres. (I like to think of this as a
'snob-free' book club). I looked at their past book selections and found a number of books on my own to-read list and some favorites that I can never seem to find anyone to talk to about. I've always liked the idea of book clubs. Every time I finish a book I am bursting to talk to someone about it, to discuss it. I liked that this group could read Divergent one month and Goldfinch the next. I liked that there were fantasy books in the mix with more acclaimed literature. It was refreshing and I found that I was sad I hadn't found it sooner because they'd already read and discussed many books I would really like to read and discuss.

I have yet to make it to a meeting, but I did pick up a copy of their December book to read in hopes of making it to the December meeting. It was a book I wasn't familiar with. Usually it's difficult for me to get into a book I don't have prior interest in, but I gave it a go.

The book was The Ghost in the Electric Blue Suit by Graham Joyce. Having no expectations whatsoever, I found the book to be pretty interesting. It feels mostly like literature but there are elements of fantasy, ghost story, and mystery that make it hard to confine to one genre. It's set in the 1970s in England so it's very British in it's language and fits neatly into the political climate of the time. There were some plot devices that worked quite well on me creating feelings of anxiety and suspense and raising questions about the reliability of the characters and even the story itself.

After I finished, I allowed myself to google the book and read some of the reviews and background on the author. I read that the book was just released in the U.S. this past summer and that Joyce passed away shortly afterward. Something about this discovery unsettled me. It was like arriving at a party thinking you are on time, only to find out that the party was actually last weekend. I found myself reading a blog post he wrote only a month before his passing on his still active website in which he beautifully talked about facing his mortality while also seeming as if he expected to get better and continue writing for a very long time. He didn't want to die. He didn't know he would be gone so soon. It was both poignant and eery. It was like reading a letter from a ghost. Which, given the book I just read, felt wildly appropriate and also incredibly sad.

It has all left me feeling a bit haunted.

(I like to think that Graham Joyce would be happy to know his words are haunting me).

Posted by Noelle McLaughlin at 10:14 AM