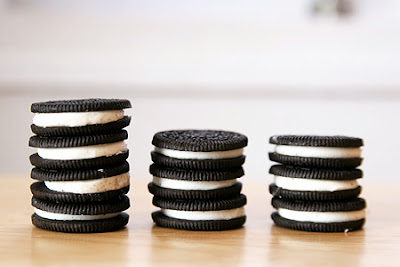 Even with all that talk about focusing on the "do's" and not the "don'ts" my first baby step is a don't.

Step one to a healthier me can be summed up in two words: better choices.

I have developed a couple of bad habits over the last year. I typically don't eat sweets. They've always been easy to give up because I don't crave sugar. But I allowed myself a few indulgences during pregnancy and some of those have continued postpartum. Mainly: Oreos. Oh man do I crave oreos now. Seems like at least once a week I was sending John Paul to the store for oreos during pregnancy and I became accustomed to it. Now in the evenings that's almost always what I want for a late night snack.

Then of course there's the take-out. Being a new parent is exhausting and cooking is the last thing I want to do after a long day at work. So take out and fast food have become the norm not the exception.

Baby step number one? No fried food. No sweets.

In other words, I'm going to choose the better option.

My first baby step will be to make better choices when preparing meals or eating out. I'm gonna skip the french fries and quit buying oreos. It's still a baby step because it's just one change, but I think it'll make a big difference. I'm perfectly capable of opting out of french fries in favor of a salad or baked potato when I'm out to eat.

Although I'm a big believer in splurges and occasional treats...this baby step needs to become typical behavior before I even think about cheating.

Posted by Noelle McLaughlin at 9:20 AM